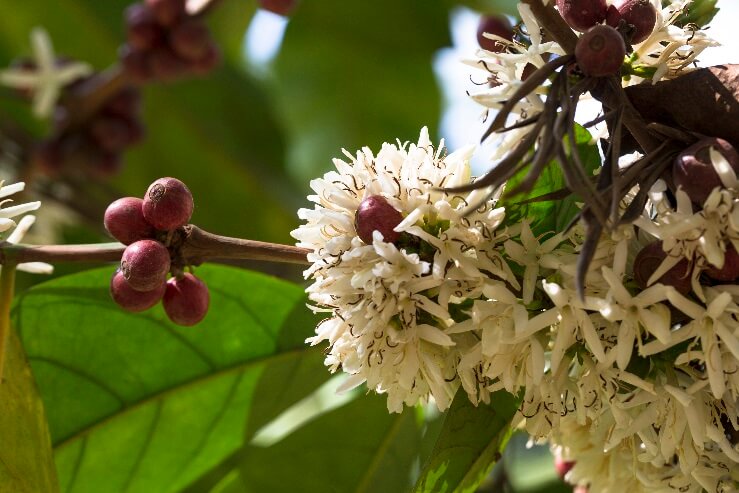 
Actually it is incomprehensible, but unfortunately it is a fact, that of the more than 250 species of the genus Coffea (which together have more than 10,000 varieties) only two are actually known and widespread: Coffea Arabica and Coffea Canephora (the latter is usually erroneously referred to as „Robusta“). Robusta, however, is a variety and not a species. So the real „Robusta coffee“ is actually called Coffea Canephora var. Robusta.

About the third big species coming from West-Africa, the Coffea Liberica, there is usually nothing at all, or at most a hint, that there are these, but they are not cultivated for taste reasons. Discovered in 1872 in Sierra Leone, Coffea Liberica was described in 1874 before the Canephora (first description 1895). Liberica's world market share meanwhile is just below 1%. What is exciting is the fact that none of the authors can specifically name or describe the taste characteristics of Liberica coffee. „Bad“ is not a flavour at all, nor is it an aroma or belongs into a chemical group.


Coffee farmers in Latin America took advantage of this fact in the past by planting Liberica plants in various places on their plantations and waiting until they had a heavy brocade infestation. The infested branches (the Broca attacks the coffee cherries) are cut off and burned and thus serve as a natural pest trap. This characteristic also earned the Liberica the name „Broca-Hotel“. 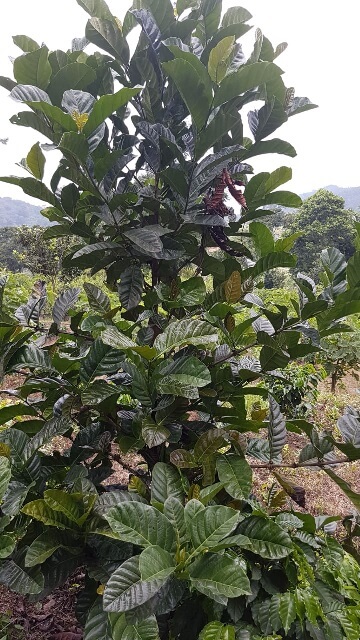 In India, the tree is planted as a shadow tree at the outer borders of the plantations. The shadow effect can, however, be classified as very questionable, as the trees do not have any particularly protruding branches. Presumably it also served here as a natural Broca trap (in some regions of India the term „sacrifice tree“ still exists, which indicates the same function) and the knowledge about it was lost in the course of time. Today, Liberica coffee in India is left to the pickers, as it seems too costly to the plantation owners to have the coffee read from the tall trees and no farmer can describe the taste of this coffee himself. Liberica is thus an additional, natural remuneration for the pickers, similar to the grape marc used by winegrowers in the past, from which grape marc spirit was then made.


Even the taste profile of the legendary „Kopi Luwak“, which is obtained from the secreted coffee beans of the palm roller, is related to the Liberica. Thus, in the photographic material of all published publications on Luwak coffee from wild animals, Liberica beans can be clearly identified which offer sufficient reason for a change in taste - unlike the legendary and scientifically untenable „intra-animal“ fermentation (i. e. the alleged change in taste caused by digestive enzymes of the animals).

The fact that Liberica ekes out such a little-noticed existence is certainly one of the reasons why this circumstance escaped the authors' investigation of Kopi Luwak and they write of superficially altered „Robusta-beans“. However, in addition to the strikingly different colour, the shape of the coffee beans is also different, although the Liberica beans also have the drop shape typical of Canephora. However, the shape of the cut allows a clear identification next to the colour.


The large species, which originates from Liberia, was spread from Africa to Asia and Central and South America. Originally cultivated in the African countries, in many cases the focus of coffee farmers shifted away from low yields. Due to their large growth, the plants require more plant spacing (5x5m) than the smaller species Arabica and Canephora (2x2m or 3x3m).


The Liberica plants can rightly be called „coffee trees“, since heights of up to 15m can be reached. The coffee cherries have a much larger discus (flower plate) and larger cherries, the leaves reach a length of up to 35cm.


Liberica is higly resistant to nematodes (worms), which damage the roots and, due to its considerable size and good growth, is an ideal base for grafting on weaker species such as Arabica. In Mexico in particular, Maragogypes were frequently grafted onto Liberica strains at the end of the 19th century and beginning of the 20th century in order to achieve better yields and higher resistance to worms (in particular also root larvae). In terms of taste, this grafted Maragogype also offered a special taste experience, as the Liberica strain with its roots leads to a stronger formation of fat-soluble aromas and a likewise increased formation of mouthfeel (body) in the cup. In addition the sweetness of the cup also increased significantly.


Liberica is immune to hemileia vastatrix (coffee rust), which is currently causing huge crop failures throughout Central America. Perhaps this fact will promote a new debate on Liberica in coffee cultivation, especially against the background of climate change. It would be desirable in any case for the variety of tastes in coffee.


Today the Liberica is most common in Malaysia, Guyana, Liberia, Suriname, Philippines, Equatorial Guinea, Nigeria, Sao Tomé and the Comoros.

I myself have stumbled across Liberica plants in different spots of this world among them Costa Rica, Brazil, India and Mexico over the last few years and have been able to identify at least four different varieties. Unfortunately, there are far too few studies on the genetics and relationship of the Liberica varieties to be able to make individual classifications. There are even confusions among the „Coffea Liberica“ and the „Coffea Excelsea“ which is the fourth most common species. Some believe it might as well be a variety of the Liberica. The following varieties can thus be assigned to Liberica: Abeokutae, Aruwimiensis, Arnoldiana, Bwambensis, Gossweileri, Aurantiaca, Passipagor and Laurentii. The Coffea Excelsea and Dewevrei seem to be closely related. The lines and crossings are S. 333, Kalimas, Kawisari, S. 26 (from which S. 288 was crossed the S. 795) and the Ligusta (crossing with Canephora). 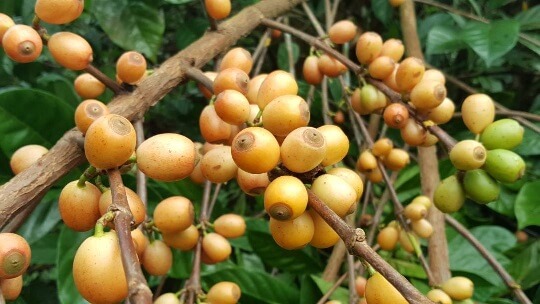 The best-known hybrid is the S. 795, an Arabica variety from India with an exceptional taste profile. It originated from the lower crossing of Kent (variety of the Tipica line) and the S. 288 (Liberica variety originating from S. 26). No other Arabica has such a high basic sweetness and such a pronounced body. Unfortunately the S. 795 is not noticed as far as possible, which is surely also due to the rather unattractive name. Like most coffee varieties, it gets lost somewhere in an „Arabica Cherries“ or „Arabica Plantation“ with various other varieties and without suitable preparation.

The beans of Liberica are yellowish to lemon-yellow in colour when correctly processed. Some varieties present themselves in light shades of green. Depending on the variety and preparation, the aroma of green coffee is reminiscent of freshly squeezed apple juice from red apples (fully washed) to light apple must or cider notes (natural). Other varieties develop banana and nutmeg tones with caramel and vanilla notes with an incomparable sweetness.


Liberica is not comparable to any other type of coffee in terms of taste. Even the green coffee has an incomparable sweetness, which later continues into the cup through roasting. In the roasting process, the Liberica coffee must be homogenized very carefully and also gently led in the Maillard phase. Due to its high sugar content and complex amino acid composition, Liberica is more suitable for light roasts than for dark roasts.


The aromas range from fruity and floral notes (strawberry, jackfruit, durian, mango, banana) to lactic aromas (mascarpone, crème fraîche, cream). If the roast is too dark, the coffee may present notes that reach into the area of ripe, sweet blue cheese and cheddar.


In blends already 5% of Liberica can dramatically enhance the mouthfeel of the whole cup and round off the taste profile wonderfully. As a single-variety cup, the coffee has an extremely polarising effect and is very much in keeping with the „hate it or love it“ principle.


Those who taste Liberica for the first time are irritated by its sweetness. An espresso from Liberica also awakens the feeling of having an already sweetened espresso in front of you. Unfortunately these taste experiences are - due to the high rarity of coffee - denied to most people - even across the coffee industry.


We will do many more experiments with the preparation (processing, fermentation) and roasting in order to understand this coffee even better and to be able to better represent its rich aromatic and haptic facets. We currently import around 500kg of Liberica coffee per year from two plantations in India, Badra Estates and Palthope Estates. These are two different varieties processes in two preparations („natural“ and „fully washed“).


Together with B.B. Deepak Chengappa from Palthope Estate, we now want to grow Liberica more intensively again. At his estate Liberica is being newly cultivated on an area of 7 hectares, in an ideal area and taking into account allelochemical influences (interactions between plants). In about 5 years we will be able to taste the first coffee of this plantation. I'm looking forward to it now.


We are pursuing further projects with Liberica with Jacob Mammen (Badra Estates) in India and are also planning projects with our partners Ednilson and Walter Dutra (Fazendas Dutra) in Brazil and Tomas Edelmann (Finca Hamburgo) in Mexico.