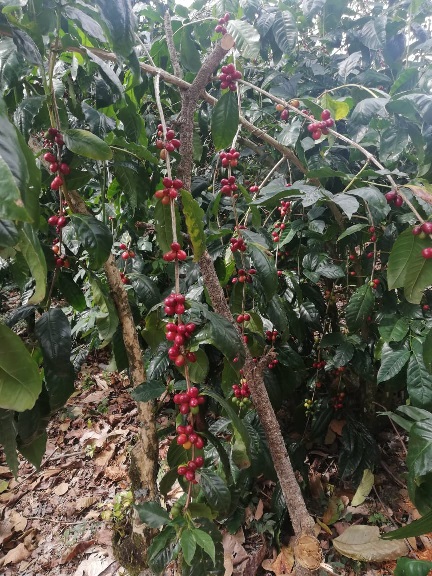 Typica coffees are the coelacanths of the coffee varieties. They are the origin of cultivated coffee. The history of Typica is closely linked to the Sun King Louis XIV and a courageous naval officer who shared his water ration with a small tree.

Typica is without doubt the oldest cultivated Arabica variety. The Typica primeval line originated from plantations in Yemen, which were planted from wild Ethiopian plants, and was formed by selection and further plantings. It has the lowest genetic diversity, since it ultimately originated from a single coffee plant. The much quoted story of the French naval officer Gabriel-Matthieu de Clieu, who brought the plant to Martinique on his ship, the „Dromedaire“ is indeed true.

A „Troy“, so to speak - a legend to which one would first like to deny the true core . . . and the most famous Bourbon - Luis Quatorze, the Sun King - also had his hands in the game. And this, even though Louis XIV detested coffee.


In the meantime, geneticists have been able to clearly prove that Typica can indeed be traced back to a single plant without any doubt. The entire plant line has therefore been created from a single plant and its offspring, which have adapted to the growing conditions of the growing countries and areas.

Typica plants, which have a maximum size of 3.5 to 4.5 m, always show the typical bronze-coloured young leaves - they never show the mostly light green young leaves of other coffee varieties. The side branches grow at an almost horizontal angle (Bourbon plants, on the other hand, have a 60° angle), while the cherries and the coffee beans inside are elongated. Almost all Typica plants - some of the few exceptions being the „Guatemala“ and „Blue Mountain“ lines - are susceptible to most diseases, pests and nematodes. The crop yields of the Typica line are low to medium.

A special representative, if not the best known, is the „Maragogype“, a mutation originating from Brazil, with enormous growth, but unfortunately high susceptibility to pests and frost. The Maragogype is the origin for „Pacamara"; (crossing with the El Salvadorian Bourbon-line „Pacas“), „Maracatu“ (crossing with „Catuai“) and „Maracaturra“ (crossing with „Caturra“). The history of the Typica line can be found in almost every coffee book and the etching of the passage of the first coffee plants to Martinique, on which a marine officer pours a plant in a wooden box, is probably one of the most printed representations in coffee literature. Nevertheless, this representation is understood more as myth and legend than as a historical document. Thanks to Gabriel-Mathieu de Clieu (1687-1774), a French naval officer, later a royal lieutenant and governor of Guadeloupe (1737-1752), coffee spread in the Caribbean and later throughout the American continent.

In 1723 he brought a coffee tree from the „Jardin des Plantes“ in Paris to the island of Martinique, thus laying the foundations for coffee cultivation in the French colonies.

The plants in the „Jardin de Planteswaren“ were brought from Amsterdam to Paris around 1710 as war compensation. The plants in Amsterdam in turn came from a plant imported from Java in 1706. So far, the genetic origin of Typica can now be determined beyond doubt. The descriptions and assumptions of old authors can therefore now be confirmed.

Through the mediation and suggestion of the personal physician of the Sun King, De Clieu received three small plants which were to serve as the basis of a French coffee plantation in the Caribbean. Of the original three plants, only one survived the long crossing, which was accompanied by calm winds and a pirate attack. To save the plant, De Clieu shared his drinking water ration with it. Already in the year 1726 the first harvest was possible and the plants spread from there over the whole Caribbean and later also over Cuba first in Mexico on the American continent.

Meanwhile there is also the theory that de Clieu took seeds to Martinique instead of living plants. This had been common practice at the time, but plants were always preferred for reasons of time, so less consideration had to be given to the climatic conditions on arrival and valuable time was saved until the first harvest. The coffee plant population on the Île de la Bourbon has also introduced both plants and seeds.

Personally, I am convinced that these were indeed plants. There are several reasons for this. First the images of the crossing and the story of the division of the drinking water - admittedly enough for a movie or a great musical, but the burden of proof is overwhelming. It seems rather as if one wants to deny the authenticity of pictorial documents from the past in general and shifts them almost fundamentally into the realm of stories and narratives. How wrong this is has now been proven by the scientific breakdown of Typica genetics.


Secondly, it is also clear from various documents that coffee was first harvested on Martinique in 1726. Three years still of the arrival of de Clieus with the coffee plants. Seed would not be fast enough to explain this multi-documented harvest. Maybe it's time to trust old sources a little more . . . because not everything that can be found on the internet has to be credible.

Typica plants thrive better at high altitudes and prefer less rainfall than the Bourbon line. On ferral soils, Typica offer fruity aromas with a fine acid profile, while volcanic soils are characterised by nutty tones and spices. The flavour profile is characterised by a fruity, fresh acidity with berry tones, which develops a high sweetness and a pronounced body in the cup, especially during dry preparation.

It is due to the Latin American cultivation areas of the Typica coffees to come mostly only to washed (thus „fully washed“ prepared) coffees, since the geography of the areas with high precipitation risks during the harvest season as well as the lack of drying kilns led to the need to accelerate the drying process in order to produce high-quality coffees. The washed coffees without fruit flesh residues could be dried more quickly and were therefore the preferred process. Therefore „Naturals“ (dry-processed coffees) were long frowned upon as low-quality and were not further developed in production and the associated know-how.

The flavour profiles of Latin American coffees are therefore characterised by fruity notes with a smaller body, which are used particularly in filter coffee. However, the potential of these coffees with their various adapted lines and sub-varieties as well as different preparations are still largely untapped treasures.

Unfortunately, far too many of the old Typica plants are still no longer cultivated, or only grown to a limited extent, due to a lack of yield and a widespread lack of knowledge about the unique taste characteristics, and are marketed almost exclusively as blended coffees, but not as single-varietal coffees. Two prominent examples are „Pluma Hidalgo“ from Mexico, which has so far impressed everyone in tastings. Almost heavy blackberry notes with pronounced sweetness and a full-bodied body clearly show the relationship to the Ethiopian roots. The situation is similar with „Pache“, of which there are now three subspecies, which are little to no distinguished: „Pache colis“, „Pache enano“ and „Pache comun“. This Typica line with its hanging branches shows a quite high yield for Typica, which matures evenly but late and is therefore not appreciated by farmers.

In addition, the two coffees have a bad image of „indigenous coffee“, i. e. a „coffee of poor people“, since these coffees were distributed to the indigenous population by monks of the early monasteries (often Jesuits) within the framework of Christianisation in order to generate additional sources of income there. These coffees were mostly prepared there dry, which was still regarded as simple and of low quality. Coffee from farms was different - more modern breeds and technically washed with great effort and dried mechanically - an image that today would not be suitable for a successful marketing campaign. Perhaps this is also the chance for a return to the Typica coffees - the coelacanths of the coffee varieties.